The State of Qatar is located in the Western Asia portion of the Middle East.  Its only land border is Saudi Arabia and rest of the territory is surrounded by the Persian Gulf.  This was my first time visiting the Middle East.  The closest I had been before was Egypt.  Qatar can be described as a much smaller Dubai but it has its own identity.  It seems as if everything here is man-made and can be quite extravagant.  I really didn’t have any expectations for this country but I was shocked to find out that foreign residents outnumber the natives!  The country is governed by an Emir named Tamim bin Hamad Al Thani and he has ruled since June 2013.  If you haven’t heard of Qatar before you will because the FIFA World Cup will be held there in 2022.

My favorite part of Qatar was the Souq. Located in the center of the capital city of Doha, souq waqif translates to standing market.  The Souq dates back over a hundred years but in 2006 the government rehabilitated it to make it look more like traditional Qatari architecture.  This popular market sells traditional clothing, spices, crafts, souvenirs, and has several restaurants and lounges.  The buildings, the construction, the windows, and the entire façade made it feel like you were transported to an ancient time.  My friends and I met there twice for dinner.  I enjoyed sitting in this historic location watching people walk by and trying to guess where they were from. 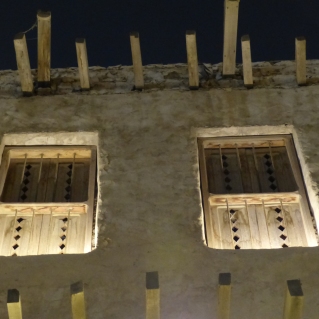 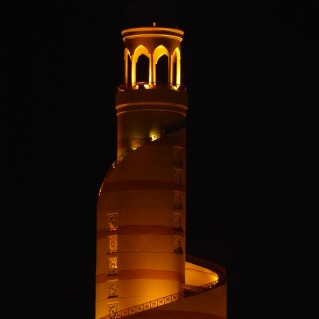 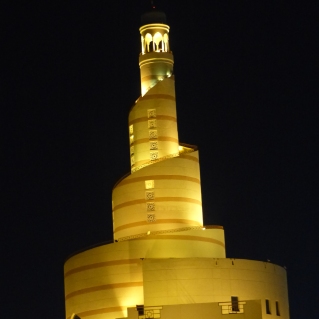 It was here that I realized that I never once guessed that a person walking by was from Qatar.  I had no idea if there was a cultural marker, a distinctive look, or an Arabic dialect.  It was here that I also learned about different headdresses that Middle Eastern men might wear.  Truth be told, I never gave it any thought until this visit and at every chance I had after, it turned into a game for me to try and guess where people where from just by what was on their head.  Mostly always made of cotton and worn for protection from sunburn, dust, and sand, the name of the headdress depends on the country.  The traditional scarf worn by men in the Persian Gulf states is called a ghutrah. It can be worn as a turban or draped around the back and shoulders using a circlet of rope called an agal to hold it in place. The plain white style is most popular and is also known as a keffiyeh. Not only are the headdresses known by a variety of names, but they also come in a variety of colors that have symbolic meanings.

A group of us participated in a desert safari which included an overnight stay in a Bedouin style tent.  This safari did not disappoint.  We were picked up from my friend’s house in a SUV driven by a very handsome tour guide.  He drove over speed bumps like they were flat surfaces which was clearly an indication of what was yet to come.  We drove for about half an hour then pulled over to have some tea before getting started.  The set up included a Bedouin style lounging area with rugs and benches for those who couldn’t sit on the ground.  There were camel rides available for those who dared, however I was not one of them. I felt bad for the camels.  I always struggle with the treatment of animals in various countries and especially in tourist destinations but I digress.  A 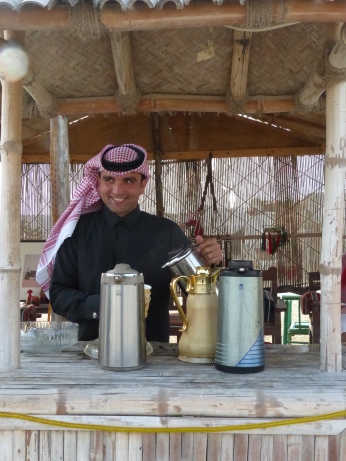 After we were done with our tea we started driving again but I didn’t realize that we were already at the sand dunes until I saw our driver looking over at the other cars with the competitive glare of death in his eyes.  I immediately grabbed the handle and held on for dear life.  I’m sure I saw my life flash before my eyes several times as I imagined the truck crashing into the sand below after tumbling and flipping down the dunes.  Ok, I’m being a bit dramatic but I really was a screaming fool, lol.  The dune bashing tour is performed by skilled drivers who have been driving the sand dunes for years but that means nothing in the moment for the rider as they do tricks, turns, and fishtails for fun at your high-pitched screaming expense. J

Once we were done with our “hold on for your life” sand dune ride, I checked my poor throbbing hand for calluses and missing skin due to the death grip I had on the truck’s handle.  Our adventure had brought us to a desert camp which definitely fit the definition of glamorous camping aka glamping.  The camp was situated by the Persian Gulf which provided spectacular sunrise and sunset views.  The camp grounds included a bbq cooking area, a tent eating area, a fire pit, a volleyball court, a seaside sitting area, porta-potties with sinks, and several Bedouin sleeping tents.  Each tent included six beds (sleeping bags were provided), an electric light, outlets, two windows, and rugs.  I was concerned that I was going to freeze overnight in the tent because I went during Qatar’s winter but the tents were surprisingly warm.  However, the freezing morning sand covering every inch of skin on my feet and toes on the way to the bathroom were not.  I performed my first desert speed walk that morning lol. 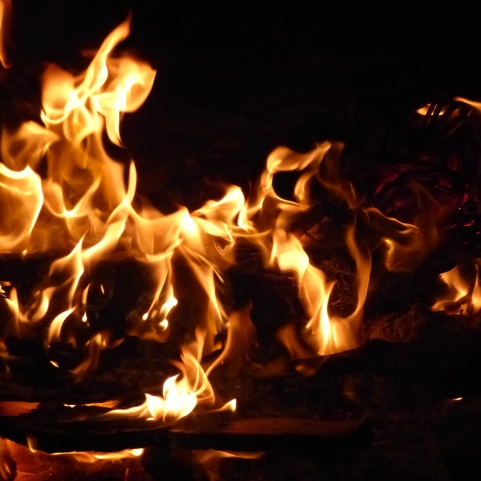 This is an excursion that I would recommend to anyone visiting Qatar whether you are adventurous or not.  It is a different experience and is one that I will remember for a lifetime.